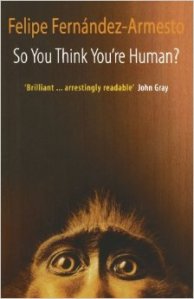 Here is a paradox. Over the last thirty or forty years, we have invested an enormous amount of thought, emotion, treasure, and blood in what we call human values, human rights, the defence of human dignity and of human life. Over the same period, quietly  but devastatingly, science and philosophy have combined to undermine our traditional concept of humankind. In consequence, the coherence of our understanding of what it means to be human is now in question. And if the term ‘human’ is incoherent, what will become of ‘human values’? Humanity is in peril: not from the familiar menace of ‘mass destruction’ and ecological overkill–but from a conceptual threat. (Felipe Fernandez-Armesto, So You Think You’re Human? A Brief History of Humankind, Oxford 2004, p. 1.)

What, exactly, is a human being? It seems like a fairly easy question to answer, right? We know one when we see one. This supposed ability to recognize humanity in another person, however, depends upon an assumed repertoire of concepts that we receive from the culture around us. Moreover, this repertoire of concepts is insufficient for thinking about some of the hardest questions of human existence, including questions about the beginning and end of life, genetic engineering, and the humanity of people with severe cognitive impairments.  Once we begin to ask these kinds of questions, we will wish to rethink any facile answers we might have to the ways in which we understand and recognize humanity.

The ways in which people have defined the human being have varied quite widely over time, as Felipe Fernandez-Armesto demonstrates in a beautifully written book, So You Think You’re Human? This book is not an exercise in deep drilling. It is a big-picture exercise. The author chooses to paint a broad landscape, exploring the variety of ways in which human beings have understood themselves vis-a-vis the rest of the world around them over time. Most of the discussion focuses on the ways in which we have thought about humanity from the beginning of the modern period (say, from the 1500s) onward.

Fernandez-Armesto’s overview touches on many topics that are relevant for Christians today, such as (take a deep breath) colonization and imperialism, racism, slavery, abortion, end-of-life decisions, genetic engineering (including “designer babies”), genetic patents by large corporations, and cloning. (I told you, he paints in broad strokes.)  While few of us spend much time considering the pros and cons of various definitions of humanity, this book will certainly lead readers to reconsider our cultural apathy toward this matter.

Spoiler alert: Fernandez-Armesto does not provide a clear-cut definition of the human being in this book. That is not its purpose. Rather, its purpose is to examine the fluidity of the definitions of humanity over time, point out the strengths and liabilities of some of the more popular notions of humanity that have inhered in human cultures, and urge more focused and disciplined conversation on the topic of humanity. As the author notes, “There is still no agreement about what ‘human nature’ is–what, beyond trivial or temporary features of our physiologies or our culture that happen to have been thrown up by history or evolution, is common to and exclusive to the creatures we recognize as human” (169).

Christians will inevitably answer questions about the nature of humanity–which we address under the heading of theological anthropology–differently than non-Christians will. After all, there are a host of Christian theological concepts that come to bear on the way in which we think about the nature of human beings, including creation, original sin, and redemption. While Fernandez-Armesto discusses the opinions of some theological thinkers, he states that “because not everyone is religious, it is more useful to look to science than to religion for a universally acceptable concept of what it means to be human” (35). Theological anthropology, then, is set aside in favor of concepts that will be more broadly acceptable.

We must be mindful, however, that the ways in which Christians understand humanity will likely come into conflict with some broader understanding of humankind. As noted above, a Christian anthropology is an explicitly theological position, one informed by different ideas and sources of knowledge (including divine revelation) than a non-Christian concept of humanity. Unfortunately, many Protestant groups (including my own UMC tradition) are well behind our Roman Catholic and Orthodox brothers and sisters, and even behind the secular culture, in the development of an explicit concept of what it means to be human. We love to talk about speaking “prophetically.” If, however, we are in fact to speak prophetically–meaning speaking on God’s behalf into a world that has lost sight of God’s will–about issues of race, human sexuality, disability, and the beginning and ending of life, we would do well to gain clarity on the larger question that stands behind each of these matters: what is a human being?

8 thoughts on “What is a human being? The answer really does matter….”