Hypocrisy is a charge often leveled at Christians. Sometimes this is a charge made by people who simply don’t like Christians, but, at other times, this charge is made because… well… we’ve been hypocritical. If you read this and say to yourself, “I’m never hypocritical,” please think long and hard about that statement.

Exactly what constitutes hypocrisy, however, is something we should think about carefully. There are of course obvious examples. One might think first of the well publicized cases of Christian superstars who are caught doing the very things they preached against. Sure… that’s hypocrisy. The offense seems to be not simply that these people did something immoral, but that they had been vocal opponents of that very kind of behavior. We can think of other kinds of clear-cut cases as well. If, for example, a church’s layleader made an impassioned speech encouraging others to tithe, and then it was disclosed that this person had not given a dime to the church in years, most of us would identify that as a form of hypocrisy.

In truth, however, these blatant cases aren’t particularly common. Most of us are just folks trying to live a good life. We’re aware of the fact that we don’t always live like we should, and when we do, our motives are not always entirely pure. Can this rightly be called hypocrisy? 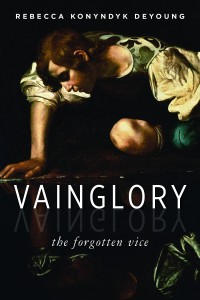 Rebecca Konyndyk DeYoung’s new book, Vainglory: The Forgotten Vice, is one that I’ve mentioned in a previous post, and which will likely make its way into future posts as well. It’s a short book, but packed with real insights about the Christian life, virtuous behavior, and why we live (or try to live) virtuously. DeYoung is realistic about the fact that Christians don’t always live up to our own ideals, and, when we do, our motives are not always pure. When we do something virtuous, such as volunteer at a homeless shelter, preach a sermon calling people to holier lives, or write a blog post about a topic of serious social significance, why are we doing this? Are we motivated simply by the desire to do good, or is there perhaps something more self-serving behind our actions? In truth, our motives are at times an admixture of altruistic and self-serving desires. We genuinely want to do good, but we we also like the image we cultivate by doing so. After all, who doesn’t like to be congratulated on this or that good deed?

Lest this sound like an extremely cynical view of the Christian life, DeYoung argues that doing good, even when our motives are not entirely (or even primarily) altruistic, can lead to the development of more virtuous character. The child who is taking piano lessons has certainly not mastered the instrument, but is attempting to develop certain habits and patterns that will become more and more natural over time. The piano lessons constitute a kind of formation. Likewise, acting like a moral person can in fact contribute in important ways to a person’s moral formation. As DeYoung writes,

“Acting as if” cannot simply be conflated with hypocrisy; rather, like our reluctant pianist’s training, it is a process of moral formation in which we deliberately practice actions that we endorse, hoping that they will eventually feel natural and gradually become part of our character. This is a natural and familiar part of the learning process, not something morally harming. The end of the process is a moral character that feels like “second nature”(67).

Put simply, the way in which you behave is not simply a result of the kind of person you are; rather, behavior forms you into a particular kind of person. Over time, then, acting in the right way can help to purify our motives and habituate us into more virtuous lives.

In fact, DeYoung argues, moral development necessarily involves behaving virtuously even when we are not intrinsically motivated to do so by virtuous desires. This kind of character development has been called “transformation through imitation.” “Complete consistency of character,” she writes, “which allows only actions perfectly in step with one’s current dispositions and feelings, thoughts and imagination, leaves no room for development and growth” (67).

So is this just a version of “fake it ’til you make it”? Are Christians necessarily hypocrites? Not exactly. “Thinking about virtue in this developmental way helps us to avoid charges of hypocrisy. We’re not faking something; we admit that we’re genuinely trying to become something we’re not yet. And the process isn’t doomed to failure; although we need confession for our current moral state, we also can develop more Christ-like character “(68).

The difference, then, between hypocrisy and this process of moral formation seems to be (a) our willingness to admit our imperfection and (b) the fact that some moral development is actually taking place.

As a Wesleyan, I found DeYoung’s argument very sensible. Sanctification, while not the sole property of Wesleyans, is certainly a key component of our tradition. We view sanctification, moreover, as a process. Most of us have not achieved entire sanctification, and that means that at times we will sin, knowing full well that our actions are inconsistent with the Christian life we proclaim. Our prayer is that God will bring our proclamation, intentions, and behavior into harmony with one another. One of the contributions of DeYoung’s book is to show that virtuous behavior, even if it is not entirely aligned with our motives, can be a means by which God leads us more fully into the sanctified life.

4 thoughts on “Are Christians Hypocrites?”

Finding the humor, beauty, and purpose in the mess of motherhood