This semester the Doctor of Ministry group that Dr. Justus Hunter and I lead is reading the Commonitorium, by Vincent of Lerins. Writing in the wake of a very contentious Council of Ephesus (431), Vincent famously insisted that “in the Catholic Church itself, all possible care must be taken, that we hold that faith which has been believed everywhere, always, by all” (6). In other words, he affirmed three criteria for judging the truth of faith claims: “universality, antiquity, and consent” (6).

Everywhere, always, by all…

Is there such a belief? Haven’t even the most basic of our beliefs, such as the Incarnation and Resurrection, been challenged time and again? Indeed they have, and Vincent knew this. Otherwise there would have been no need for the Council of Ephesus (or any other of the ecumenical councils). It is precisely because of such disagreement within the church that Vincent wrote. He addressed what he considered very dangerous challenges to the core doctrines of Christian faith. 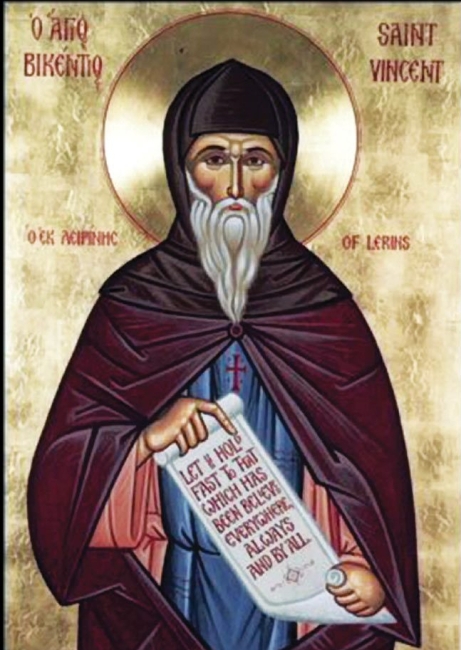 Most of the controversies in the fourth and fifth centuries had to do with Christology. Was Christ a person, a demigod, God, or some combination of these? Was there a divine Christ and a human Jesus? Was the child conceived in the womb of Mary actually God or was he something less than God? Hence the question, should we call Mary the Theotokos, the “Godbearer,” or the Christotokos, the “Christbearer?” (In case you’re wondering, Theotokos won the day.) Vincent dealt directly with these kinds of questions, particularly from three opponents: Nestorius, Apollonaris, and Photinus.

Attempts to answer such questions may seem like vain intellectual posturing, too abstract to matter. In fact, however, our answers to these questions matter a great deal. If Christ is not God, then God Incarnate did not die for our sins. The atonement is not God’s self-giving love, but the cruel sacrifice of a helpless human. Further, as Gregory the Theologian (a.k.a. Gregory of Nazianzus) taught, if Christ did not take on our nature, then Christ did not redeem our nature. What is not assumed is not redeemed. If Christ did not redeem our nature, then we have no power over sin. Vincent knew that insufficient answers to these kinds of Christological questions would create a chain reaction. How we think about Jesus affects how we think about salvation. How we think about salvation affects how we think about our lives in the present and our eternal destiny. These beliefs in turn affect the way in which we will order our lives morally. Doctrine matters.

Still… everywhere, always, by all… Isn’t that overstating things a bit? Vincent was aware that major claims of the Catholic Church had at times been vigorously contested. He was aware, for example, of the Arian controversy, and the fact that there were a great many people, including emperors, who agreed with Arius against Athanasius.

When he claims that there are faith claims that have been believed “everywhere, always, by all,” Vincent doesn’t mean that there has been complete unanimity through the centuries. Rather, he means that the church has long and widely affirmed certain beliefs, despite periods of intense disagreement. There may indeed be instances when large parts of the church fall into error, but over time she will right herself. During the fourth century, large parts of the church rejected the eternal Sonship of Christ (i.e., they embraced Arianism). Yet over time the church rejected the Arian heresy and returned to a position of right belief. To understand what it is we are to believe, we need not look to aberrations, regardless of how popular they may be at a given time, but rather to the ancient, widely held, and repeatedly affirmed teachings of the church.

The desire to reinvent the Christian faith is nothing new. It is not a symptom of modernity or postmodernity. It is characteristic of humanity. Vincent reflects on this characteristic in light of 1 Timothy 6:20: “O Timothy, keep the deposit, avoiding profane novelties of words.” “What is the deposit?” Vincent asks. “That which has been entrusted to you, not that which you have yourself devised: a matter not of wit, but of learning; not of private adoption, but of public tradition; a matter brought to you, not put forth by you, wherein you are bound to be not an author but a keeper, not a teacher but a disciple, not a leader but a follower” (53).

Everywhere, always, by all….

We stand within a Great Tradition, a tradition for which saints and martyrs have given their lives—and continue to do so even now. As in the ancient world, Christians today have to navigate difficult cultural and philosophical waters. This isn’t easy, but we have guides who have gone before us, who point us back to what has been affirmed repeatedly in prayer and supplication. They points us to the faith of the Church Universal, affirmed everywhere, always, and by all.

One thought on “Everywhere, Always, By All”